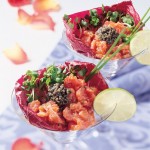 Char tastes rather like salmon but is a smaller fish making it a better size for two. There are both wild and farm-raised Char. Wild fish are preferable from a nutritional point of view, as, in theory, they are able to obtain their normal diets rather than some sort of feed which might not contain all the nutrients the fish require. Capers are the bud of a flowing shrub, which is native to eastern Asia but widespread in the Mediterranean region. Capers are used as a condiment, either pickled in vinegar or preserved in brine.